Caravane Cinéma is a film tour established from a well-defined itinerary in a selected region of Cameroon. Its principle is to organize outdoor screenings of films made by African directors. The films are selected both for their cinematographic writing but also for the relevance of their view of the situation on the African continent.

In African cultures, there are no defined places for artists, art is everywhere in life. It is in this way that we want to bring cinema to the people, by integrating it into the streets of villages and working-class neighborhoods in Cameroon’s big cities, as close as possible to the people. Reaching all social strata by going to schools, tontines, associations and companies?

We work around a few films (three or four maximum) to cultivate the critical spirit of the spectators and to allow people in the localities to question themselves about the images they see. 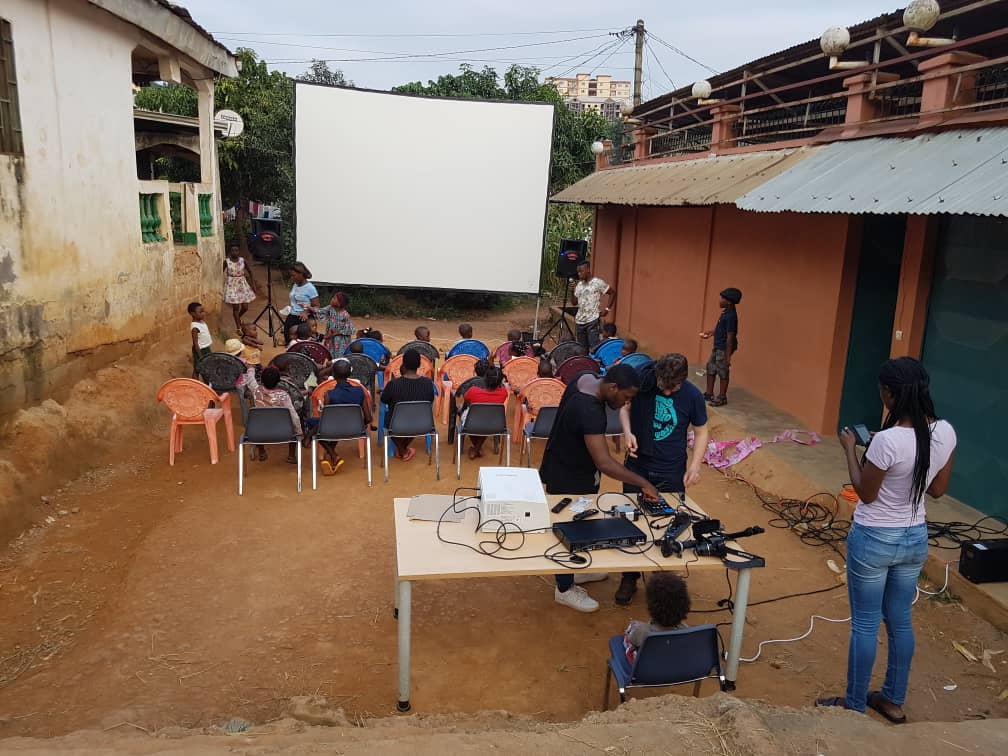 Each year Caravane Cinéma chooses a region of Cameroon, defines an itinerary and a program. For the first edition, the route of the Caravane was chosen according to the locations of Rosine Mbakam’s films The two faces of a Bamiléké woman shot in 2015 in Yaoundé, Douala and Tonga, as well as Chez jolie coiffure which portrays a young Dalaise woman who emigrated to Belgium. These films were screened in the working-class neighborhoods of these three cities with the support of the Belgian Embassy in Cameroon.

Before the screening date we do a location scouting in the village to inform the local authorities, the population and choose the sites of our open air venue. It is also the occasion for a first interaction. On the same day, part of the team goes door to door to give information about the programmed film, the place and time of the screening as well as the activities around the Caravane.

The screenings will take place in the evening. During the day, we will offer, among other things, a small film workshop on the places where the Caravane will be passing by. The idea is to accompany the making of a very short documentary film (5 minutes maximum) about the village, filmed by the people of the village. The aim is to familiarize people with the tools and the language of cinema in order to allow them to film themselves, to see themselves and to question their reality. 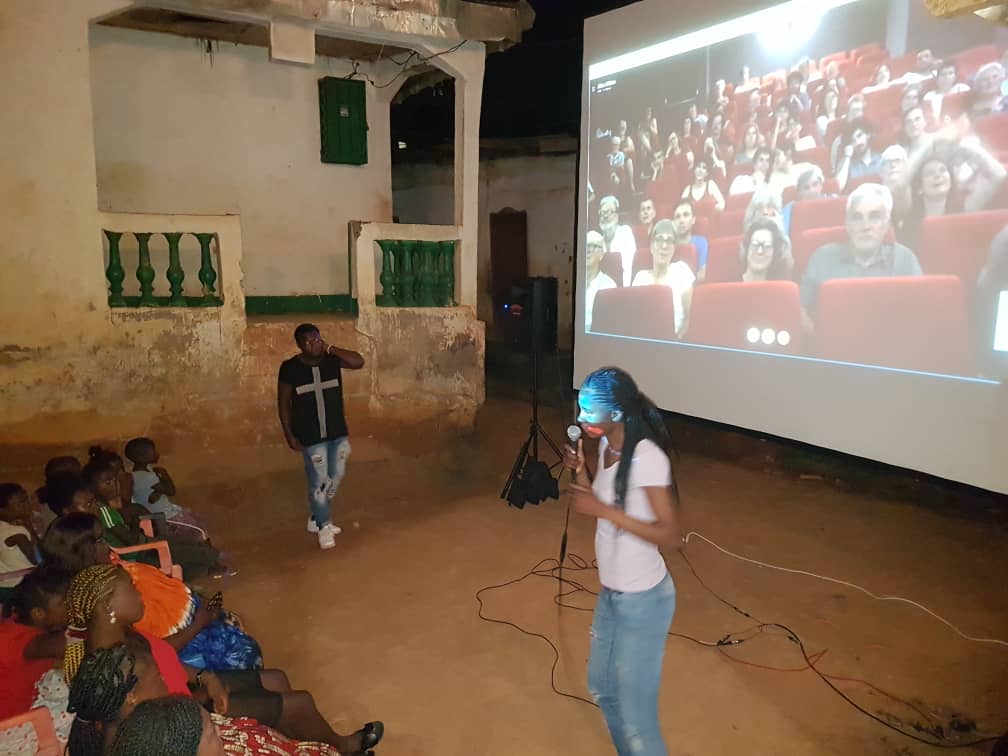 THE WORDS OF ROSINE MBAKAM

« I grew up in a working-class neighborhood in Yaoundé. At the time, my parents didn’t have enough money to buy a television. Only one household in the neighborhood owned one. The television programs started at 4 p.m. You had to come early to get a window seat. In order to get a place inside, you had to wash the house of those neighbors owning the TV. I did that a lot so I wouldn’t miss anything that was on the screen. It was for me the time of day when I could feed my imagination and connect with the rest of the world. What I saw transported me to an unknown elsewhere for days on end. The images aroused desires and dreams in me. It allowed me to distance myself from my reality by wrapping myself in a bubble that sometimes protected me from the harshness of life in my neighborhood. It filled me with hope to know that in my imagination everything was possible for me. It gave me the strength to move forward in my own reality. My little sister and I would prolong the pleasure of these TV sessions by reciting lines from movies, commercials and credits… We staged ourselves, sang and discussed our favorite characters.

The films I saw opened me up to the world but not enough to me, to my culture. There were very few African films and even fewer Cameroonian ones. My imagination was built from the reality of other populations. I couldn’t question my history nor what surrounded me because I didn’t see enough of my reality in images. It took me some time to decolonize myself from an imagination built on a reality that was not mine. I didn’t yet know that the images I saw at the time left me with a desire to tell my own stories, a dream of seeing my reality and faces that would look like mine on screens. Today, I am a filmmaker. My films are seen all over the world and not enough in my own country where my desire to make films was born.

That’s how the desire to create the Caravane Cinéma project was born. I would like to give back what cinema gave me when I was this little girl in this popular district of Yaoundé. A hope, a dream and a job. I would like to give people the opportunity to see films made by African directors and that are linked to their reality, so that they can build an imagination that is specific to their history, their culture, their reality. The idea of Caravane Cinéma is to allow people to see themselves, to see their own images so that they accept them, question themselves, dream and liberate themselves.  »